At our last camp of the trip we accomplished in a limited way two of our goals – seeing the migration and seeing a wildebeest birth. The herd was well south of our camp in the Kusini area of the Southern Serengeti. They were near the Serengeti NP -Ngorongoro Conservation Area boundary so we drove south about an hour to where the herd was, and it was as good as advertised 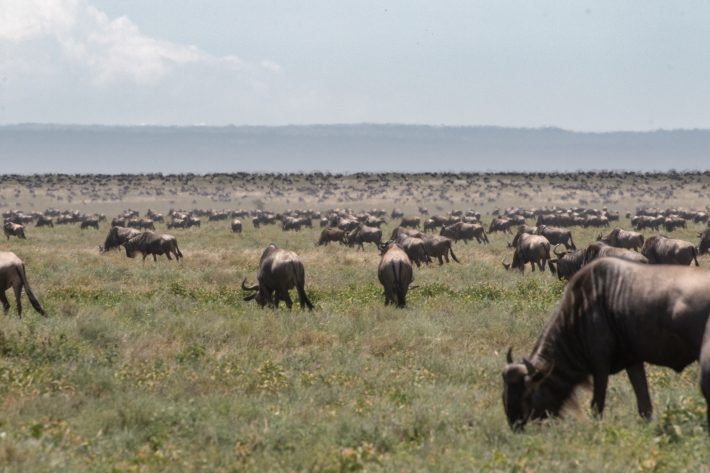 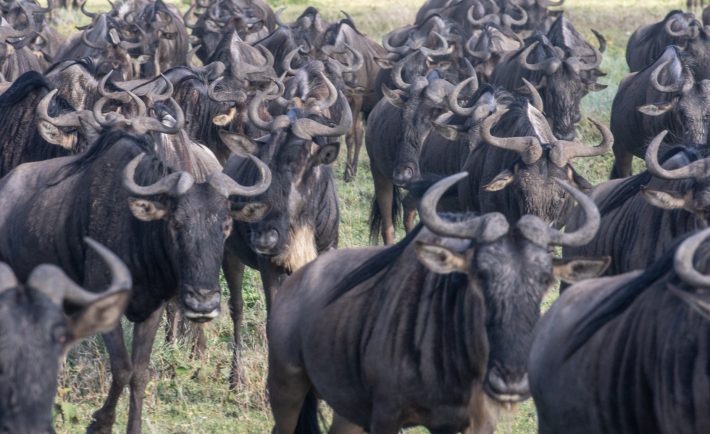 The animals stretched from horizon to horizon.  Problem was we weren’t sure where the border was and since going into the Conservation Area was a no-no, we were there less than a half hour. 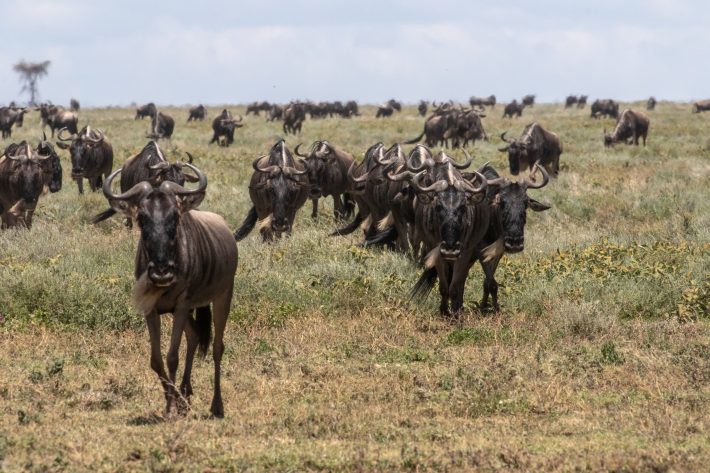 The day before we had found a small wildebeest herd, and someone pointed out there was one ready to give birth. We followed her for over a half hour before she finally settled down and gave birth.  Within 5 minutes the baby was up and was soon running.  Within 20 minutes she was leading the herd with her mother at a good trot.  Amazing! From a photographic perspective the problem was the Park had cracked down on the guides and we couldn’t go off road.  So this all happed from over 100 yards away. The baby was barely a pixel or two.  But still fun to watch.

And we did see several other new born calves, most less than a half hour old (You can see the mom still has the placenta) 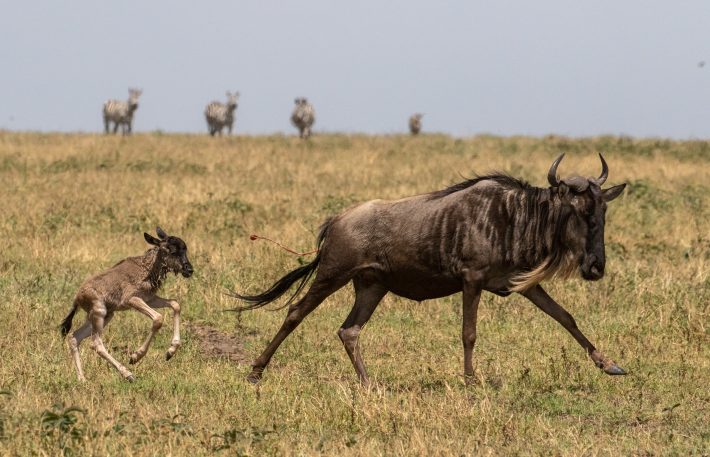 A few minutes later and it was running like its mom. 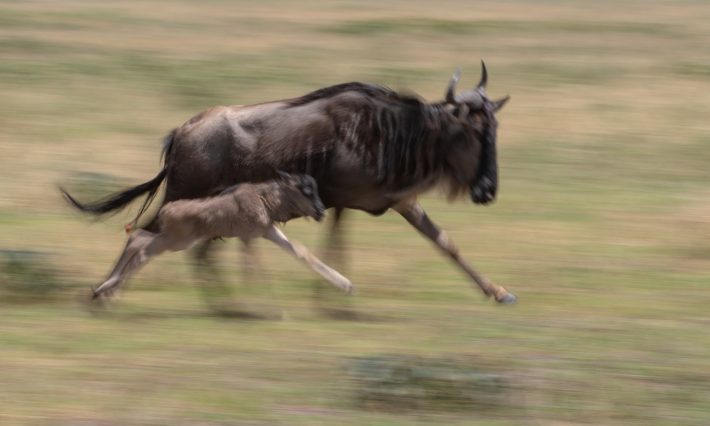 The number of predators (big cats such as lions, leopards and cheetachs)  is related to the number wildebeest, the more wildbeest the more predators (they like easy food).  Since we weren’t seeing a lot of wildebeest, we didn’t see many predators.  But, aside from sleeping lions, when we did see the cats we got good shoots like this nice silhouette of a leopard: 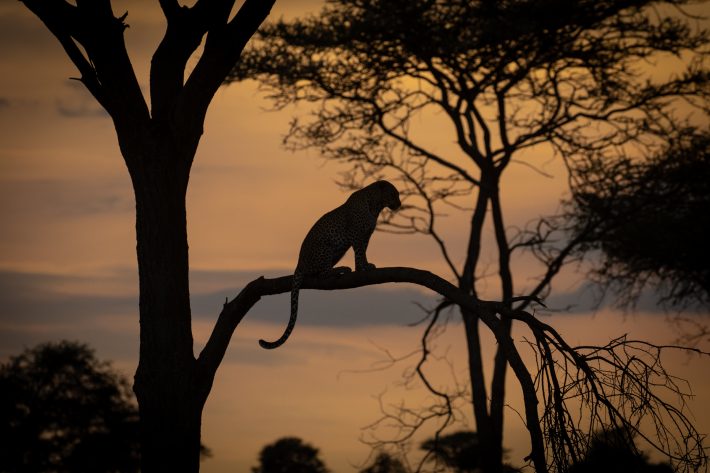 This area did have a lot of giraffes 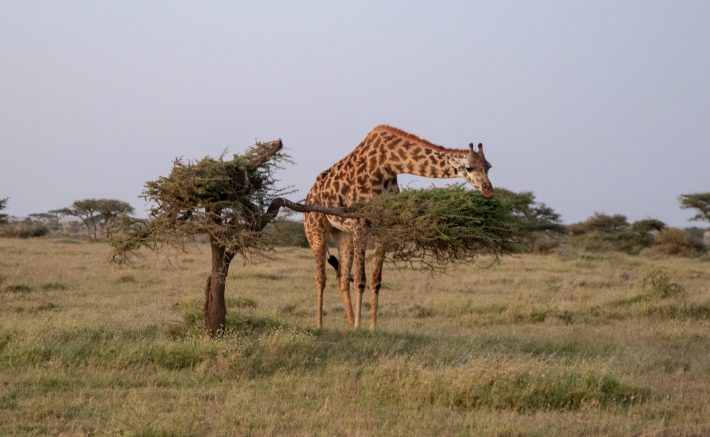 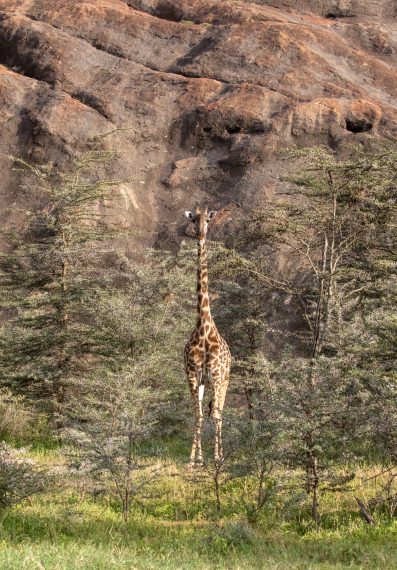 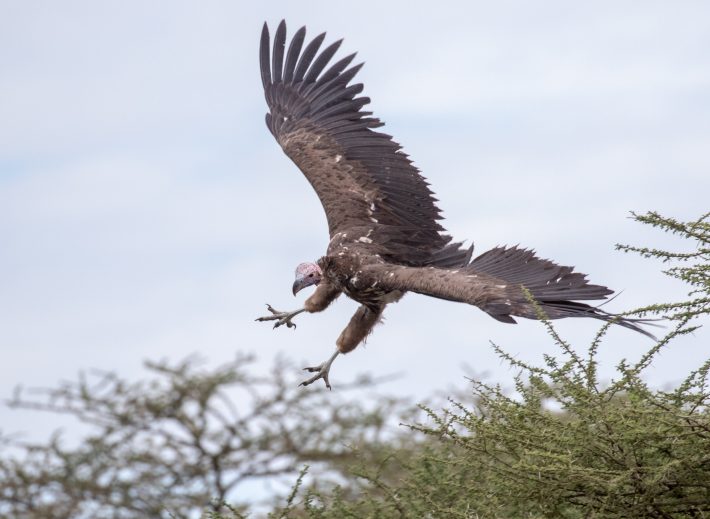 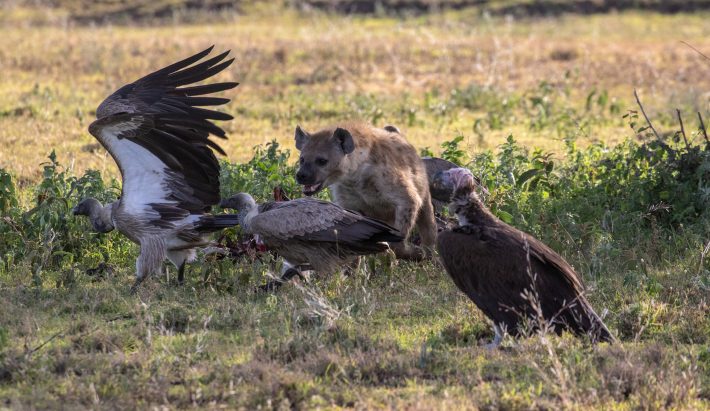 It was a rough trip with lower returns than normal. We had to work hard to get our pictures, sometimes driving literally an hour to find photo ops.  That made the poor roads seem tougher than when you are seeing something to shoot every few minutes.  While we didn’t get to see the migration or the number of births we had hoped, we did get a lot of great shots and had some great experiences.  As the saying goes, even a bad day in the bush is better than a good day in the office (or home in our case).  We are already planning our next trip back to Africa and its amazing wildlife.