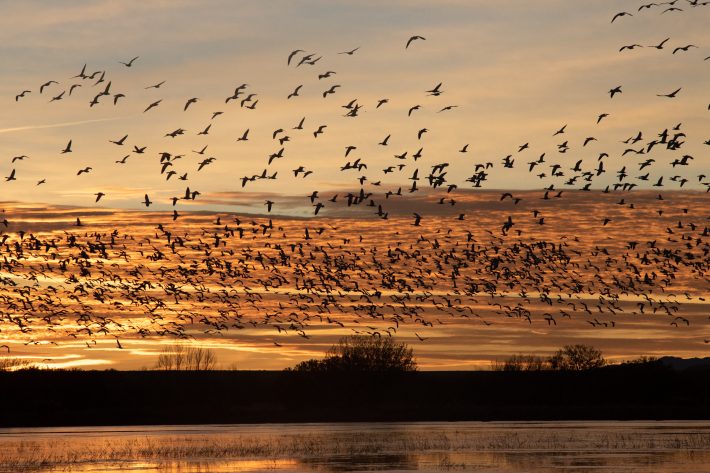 Bosque de Apache in New Mexico, with its up-close sandhill cranes and snow geese blast offs, is one our favorite places to photograph. This was our 6th trip to this bird photographers’ paradise.

The star of the show this year were the snow geese, who would congregate in the ponds and fields of the Refuge and if you were lucky they would blast off all at once.  Seeing thousands of birds leave they resting spot in less than 10 seconds is an amazing sight. The iconic bosque shot is the geese blasting off with the red sky of a sunrise in the background.  We saw it our fist trip in 2010, but hadn’t seen it since, until this trip.  But we had to work for it as only one morning had color at sunrise.

The afternoon before (a Friday) was not good.  We spent 2 hours at the flight deck in beautiful light with thousands of geese waiting for them to blast off.  They didn’t get the day’s schedule (need to talk to their union rep about that) and flew off in dribs and drabs. 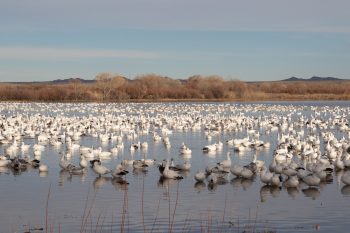 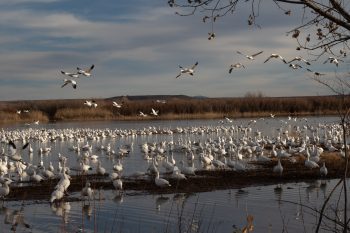 Saturday morning though made up for it.  I arrived at the Flight Deck at 6:25AM and as soon as I had my video camera set up the geese flew in. I immediately started recording and went to the car to get my DSLR to capture the moment.  Then 10 minutes later they blasted off, only to return to where they started.  They did this again before 7:00.  And all the time there was good color in the sky.  I stayed around until they finally left around 7:30AM.  3 blast offs in an hour, not a bad day! 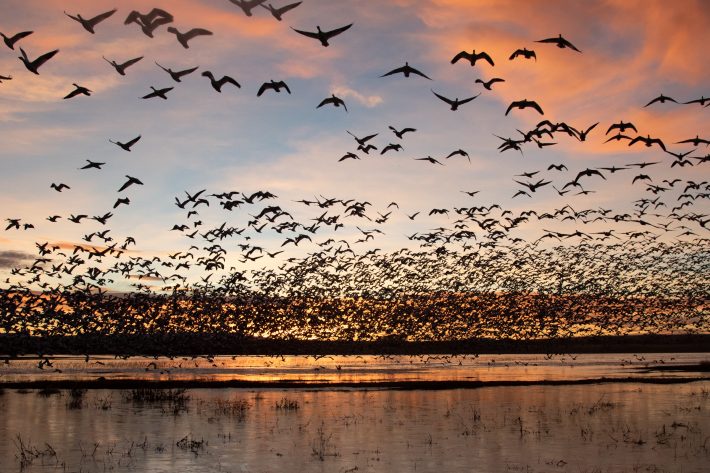 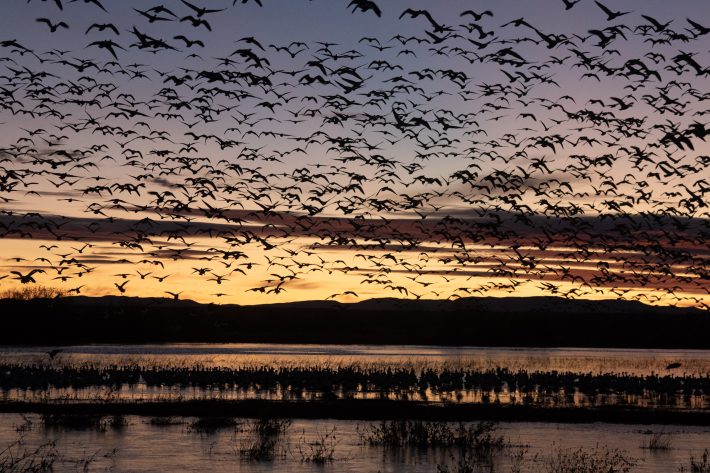 Of course the video better captures the scene,

but even it can’t fully capture the feeling of thousands of birds lifting off at once, heading right towards you making an unbelievable racket.  No wonder we keep going back.

The other main attraction at Bosque are the Sandhill Cranes. While they were not as numerous as the snow geese nor concnetrated there were plenty of them.

And while they  didn’t all leave at once, but in ones and twoes, they are beautiful 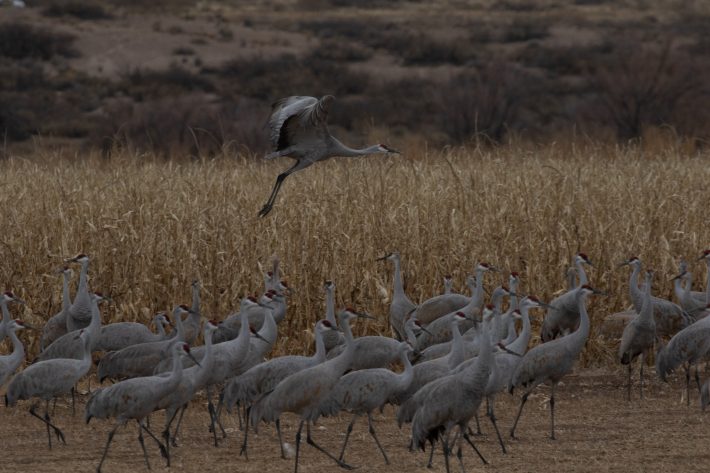 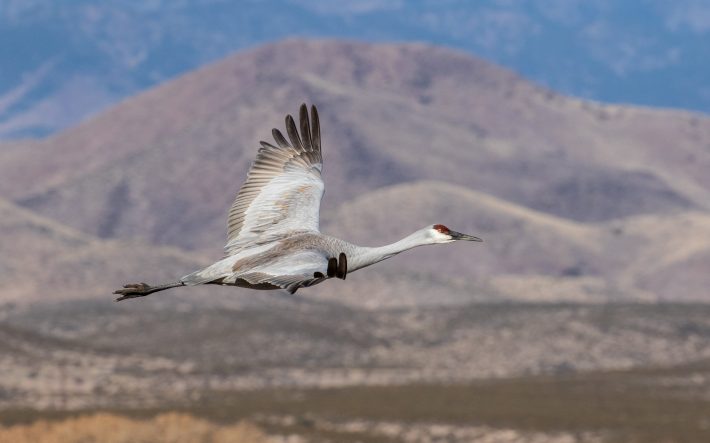 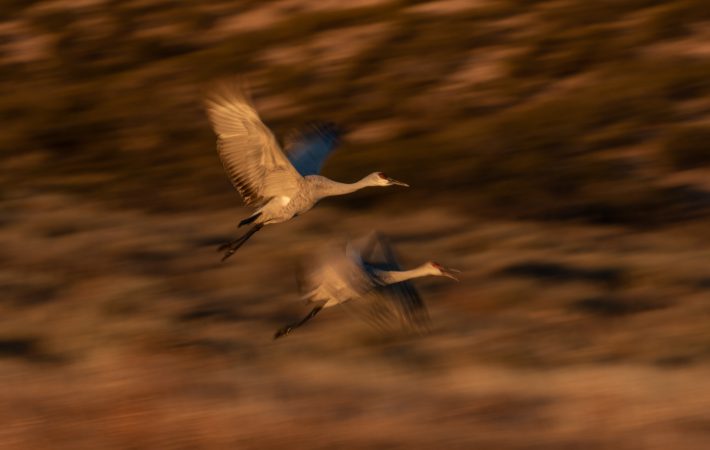 The cranes were there usual feisty selves. 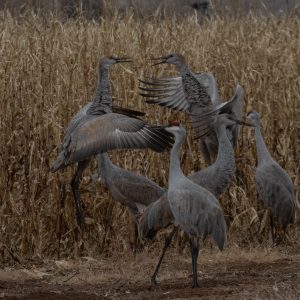 An unexpected sighting were the wild turkey’s.  While they have been in the area for a long time, this was the fist time we had seen them. 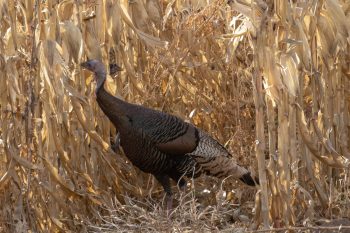 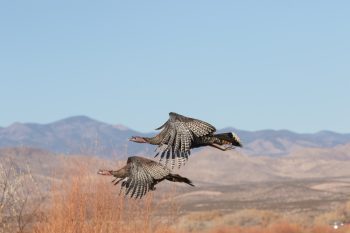 One of the benefits of the cold was the morning fog/mist that rises up from the water as the air warms.  We were lucky enough to get one morning with the mist, and to have a bald eagle pose for us. 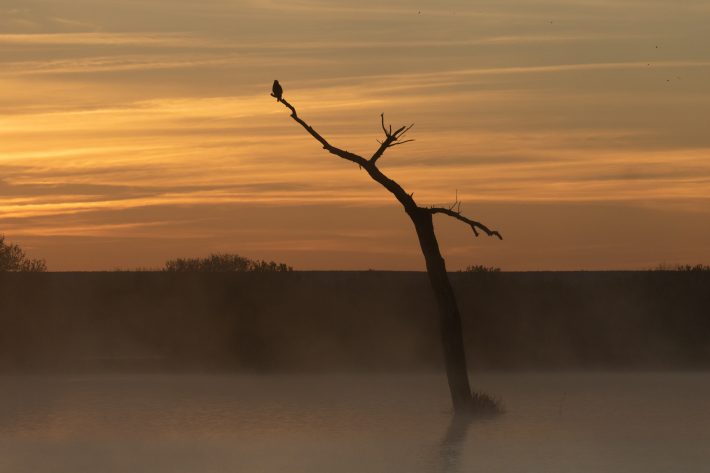 We are ready to go back again.