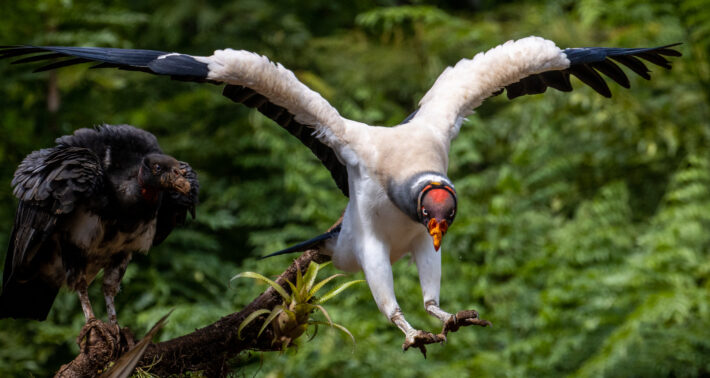 After our days at Crocodile Bay (see our report here), we headed north in Costa Rica to near the Nicaguran border to see if we could photograph the King Vulture.  We always like to amortize our travel over at least two weeks.  While the flight to Costa Rica is relatively easy – two 3-4 hours flights from San Francisco to San Jose (Costa Rica) via Houston, the prep and the packing are basically unchanged once you get beyond a week’s trip, so we say why not extend it to amortize the travel cost in both dollars and time.  We had long been aware of a hide/blind at Laguna del Largto designed to attract and photograph king vultures, and this seemed  like perfect time to visit it. 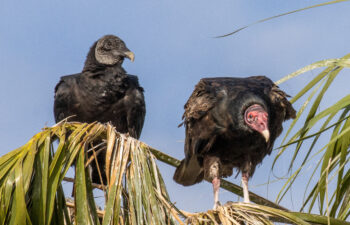 You are probably asking why vultures? Aren’t they unusually ugly and just a bunch of scavengers who only show up for road kill.  Well you are probably thinking about the two vultures we have in the US, the Turkey and Black Vultures.  (Actually there is a third, Condors, but they are so rare most people haven’t seen them).  And yes they aren’t much to look at, but their behavior is interesting and they occupy an important ecological niche, quickly and efficiently consuming dead animals that might have died from a disease-preventing such disease from spreading and affecting other animals.

In Latin America, in addition to the Black and Turkey Vultures, they have  other vultures.  While these vultures exhibit the same basic behavior, the King Vulture we were chasing is a most colorful bird.  And outside of the condors, they are the largest vulture in the Americas 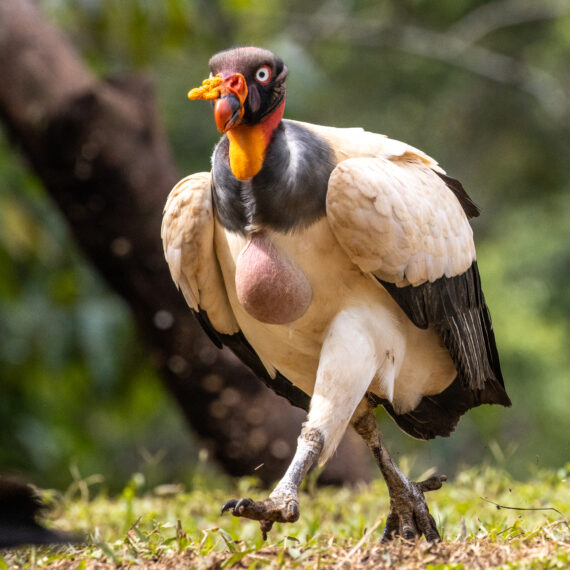 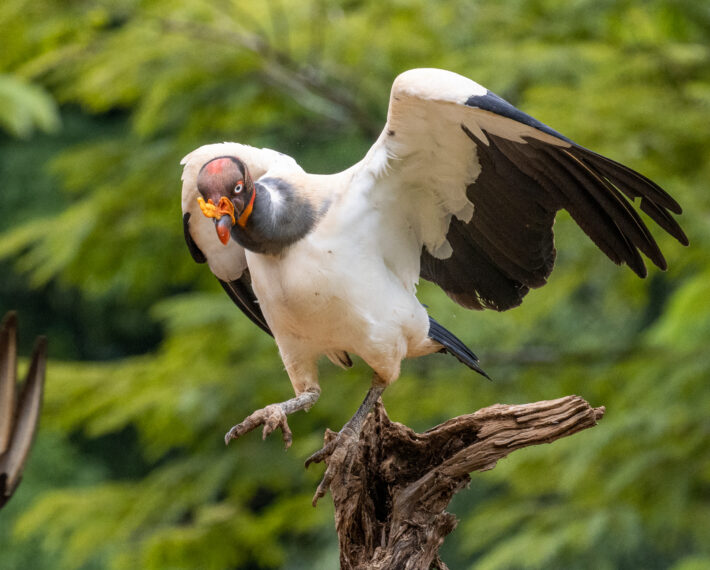 What attracted the vultures to our hide was not road kill, but left over pigs parts that the vultures knew when they were being delivered 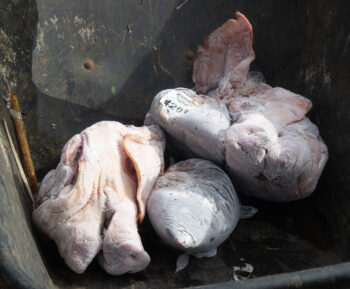 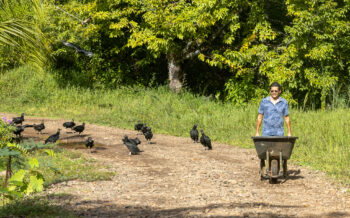 and when the food arrived a feeding frenzy ensured.

We all can remember as we gorged ourselves at our recent Thanksgiving diners how we wished we could expand our stomachs.  Well, some birds do have that ability.  They have a crop, an expandable muscular pouch near their throat that is used to temporarily store food.  Vultures have one and will gorge themselves when food is abundant, causing their crop to bulge.  The bird on left has not started to eat while the one on the right is pretty full. 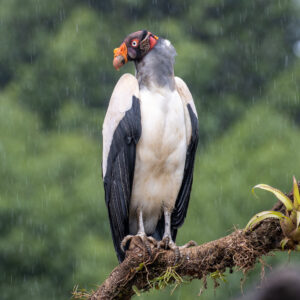 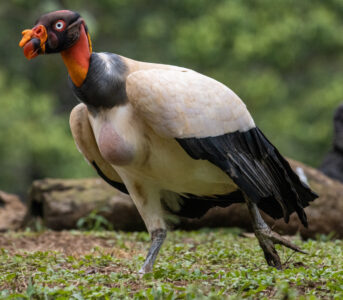 You might have noticed, like this King, that there were a lot of back birds also enjoying the feast at the hide. 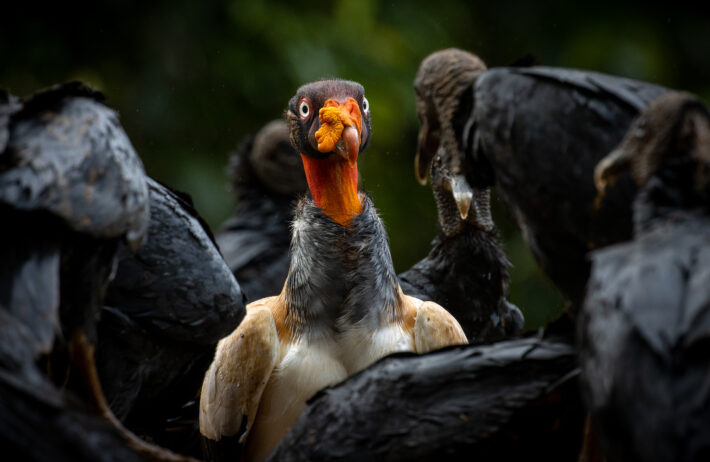 Well these were black vultures, the same species we have in the US.  While they are smaller than the king (at 3.3 pounds weighing less than half  of the king’s 7.3 pounds), they are feisty and don’t let the kings dominate the eating.  Nor did they let other Black Vultures get in their way, having many fights among themselves which looked brutal but didn’t t draw any blood that we could see 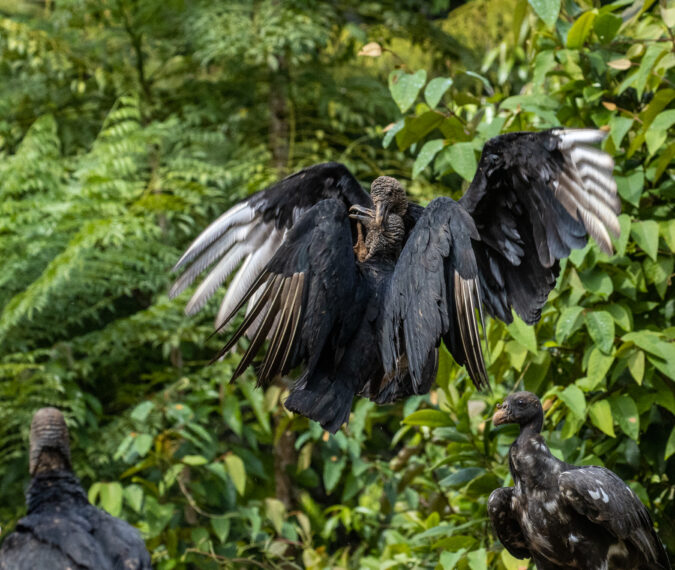 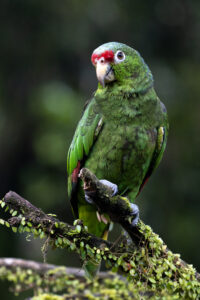 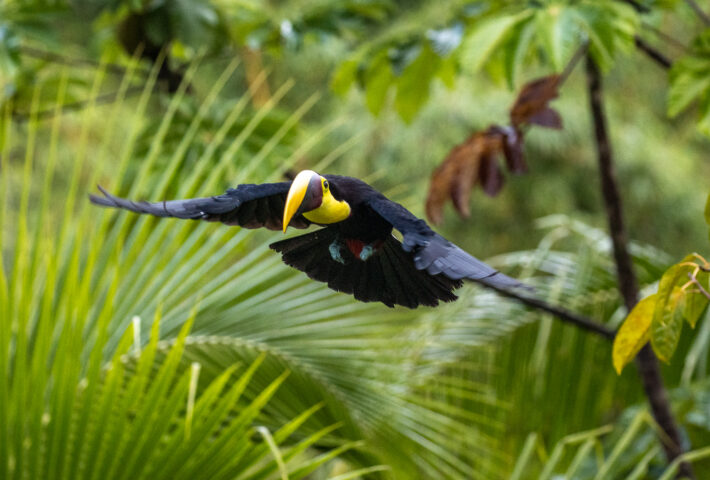 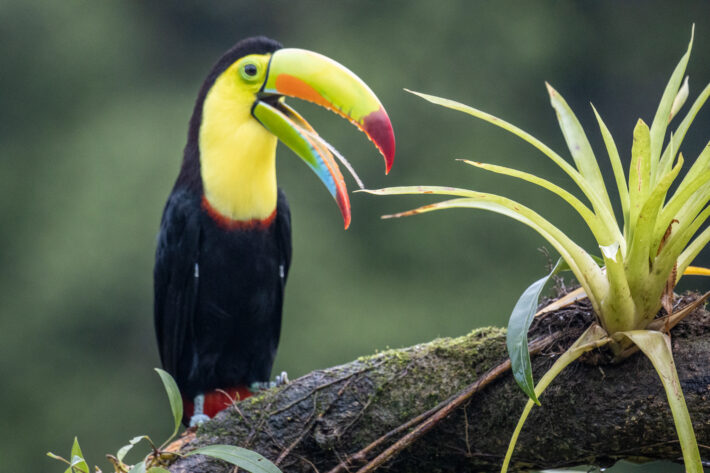 The wildlife in Costa Rica is colorful, it looks even better in a video (as do the turtles)

And then it was time to head home for some sheltering in place and Thanksgiving Turkey.