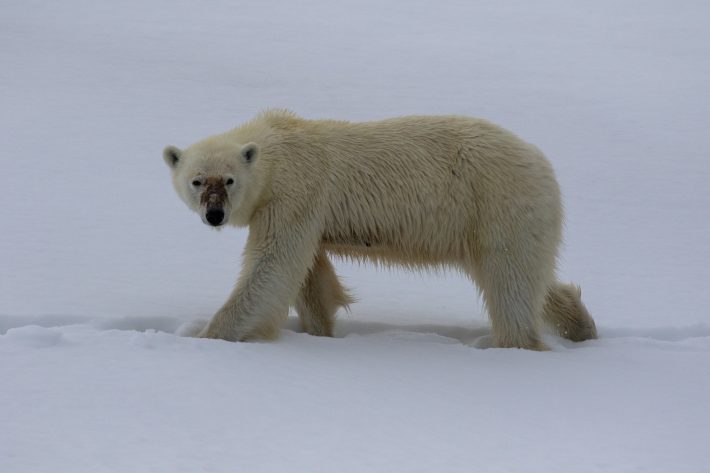 After our last trip to the tropical heat of Belize, we decided to balance things by heading to the cool Arctic and look  for Polar Bears. Actually we were hunting for them, defining hunting as skillful tracking and acquisition of an elusive target.  From our previous 4 trips to the Arctic looking for bears we knew how elusive they could be, and our leaders were skillful trackers.  And as we soon learned the polar bears have a different and more traditional definition of hunting.

We went to the Svalbard archipelago, located in the Arctic Ocean north of continental Norway and about halfway between Norway and the North Pole. It has the northernmost year-round settlement on Earth and is home of one of the largest polar bear populations in the world. 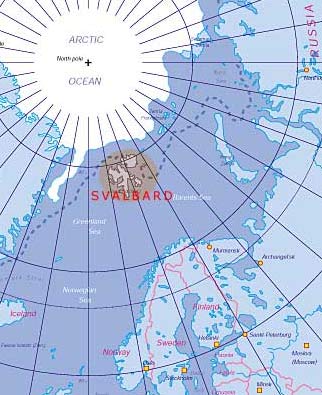 At about 650 miles from the North Pole, our wool neck scarfs were more important than our neck coolers, which greatly appealed to Catherine. The weather turned out to be as advertised, mostly overcast in the 30’s, a couple of very light snow flurries, and the sun did shine through once or twice.

In our previous two trips there, we went on a large (for us) ship with 50 passengers.  So this time we decided to go small.  Our ship, the M/S Freya, was 141 feet long and carried only 20 passengers. 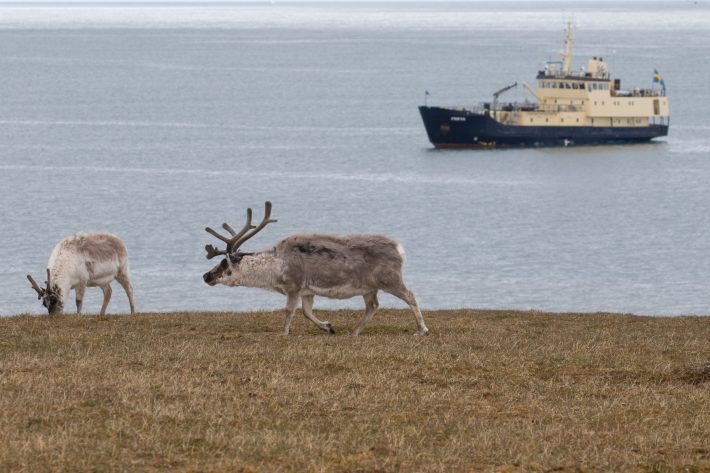 And yes we did see some reindeer (caribou in Western Hemisphere). With its small size the Freya could get into small fjords that the larger ships couldn’t (she had ice strengthened hull so we didn’t need to worry about the ice).  We could then ‘dock’ in the ice and wait (where we the bait?). 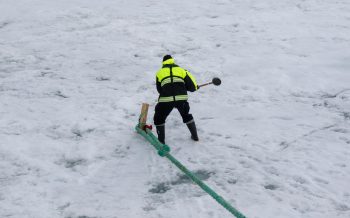 The highlight of the trip was a magical 24 hours when we were tied up in the ice and had 7 polar bear visits (most were 5 or 10 minutes though a couple were more than 20), with several of them ‘attacking’ our ship.  Got some great pictures.  It made the trip, we could have gone home after that day very happy campers. 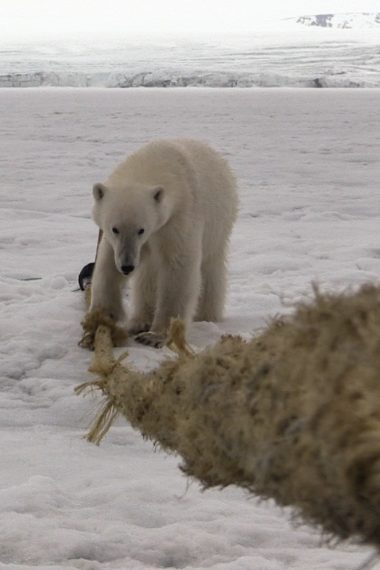 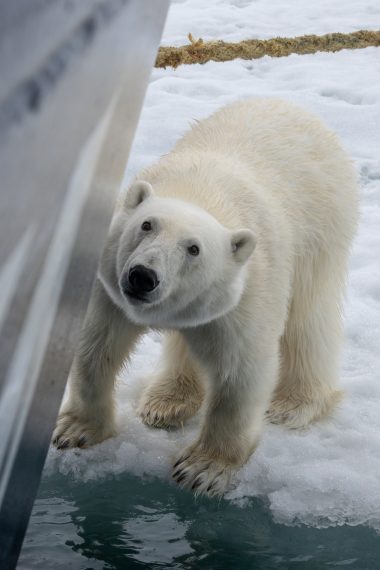 Because the small Freya had a short freeboard (6 feet)  the polar bears were to stand up and reach the deck, which made for some interesting interactions with them. It was unclear who was hunting who. 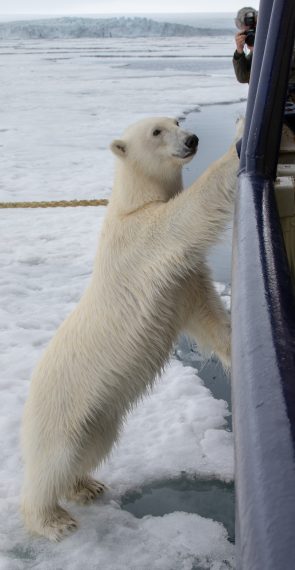 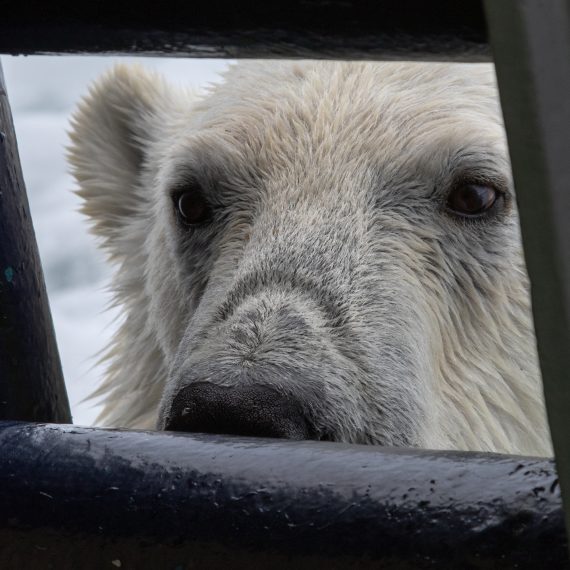 However the stills don’t do justice to the visits, it takes video. Here’s the video I put together about the trip:

We really had only two other photo ops with the bears. One was a 20+ minute shoot with a mother and two cubs walking along the shore which we shot from the zodiacs. 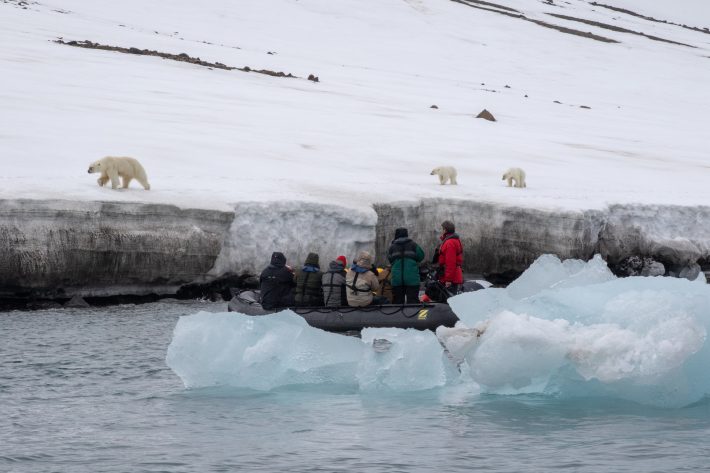 Our walrus adventures really didn’t pan out.  They were absent from 2 of the 3 haul outs we visited and on the third there was only one in the water.  The rest were lounging on the beach in a lump (whale scat as Catherine calls them) and not interesting, despite the fact we got fairly close to them: 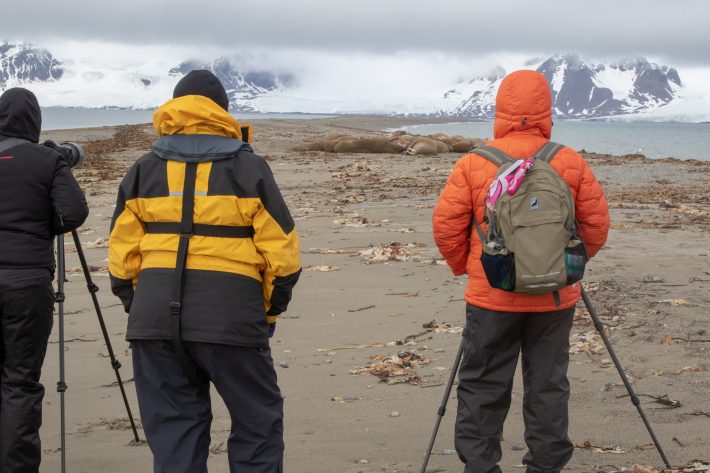 But what worked out better were our photographing the Arctic Foxes.  These are the cute little foxes that you see with their white coats (to blend in with the snow).  Well it was late spring when we arrived, and the foxes were shedding their white coats for their brown coats (to blend with the dirt as the snow melted off).  So they looked a little motley. As in our previous trips, they were feasting on duck (eider) eggs 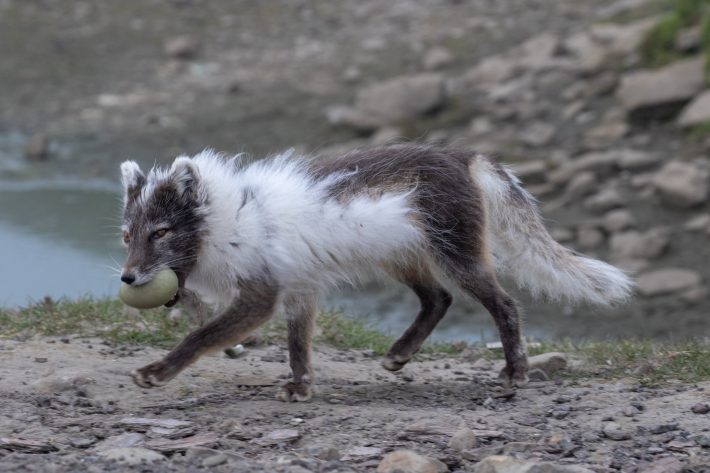 A newbie for us on this trip was the opportunity to visit one of their dens, and see 4 (or 5, accounts differ) 4-week old cubs. They were playing and establishing dominance.  We saw one be pushed back into the den by two of the cubs, and then the stronger of two remain cubs make it clear to the other who was in charge. 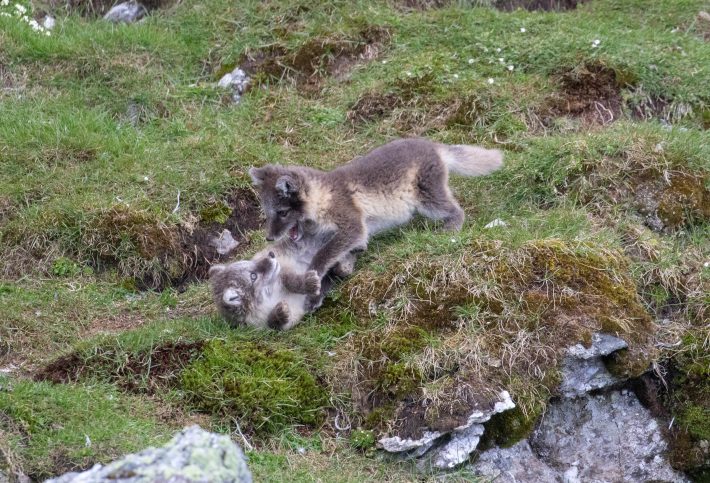 We liked the cool Arctic so much that our next trip is to the Northwest Passage where we will be looking for Beluga Whales. 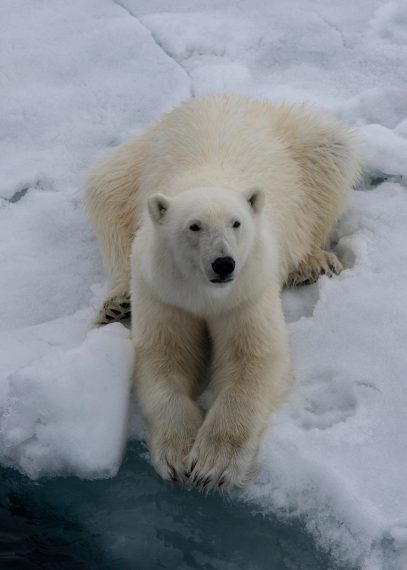