As the summer droned on it was time for us to get another nature fix.  We found a fishing lodge in Alaska that attracted bears who joined the lodge’s guests in fishing for the spawning salmon that inhabited the lake the lodge was on.  It offered a photography option.   We doubled checked the science,  it was constantly changing as we learn more about the virus and concluded the key elements of risk reduction of physical distancing, wearing masks, staying outside and washing your hands still applied.   Because our goal was to get away from the other guests to get the best shots (physical distancing) and we would spend the vast bulk of our time outdoors, these two were easy.  Wearing masks and washing hands were more difficult as they required us to be disciplined but we are getting better the longer this thing hangs around.   We were heartened that we couldn’t find any stories about COVID outbreaks on planes or among airline employees which reinforced our conclusion that the risk in flying was low. 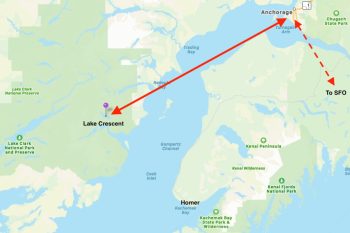 Our lodge was on beautiful Crescent Lake in Lake Clark National Park, about 150 miles  southwest of Anchorage and 2200 miles northwest of San Francisco and only accessible by float plane.  It was about a 70 minute flight from Anchorage.

Cresent Lake was fed by glacier streams, which produced a wonderful turquoise color to the water. 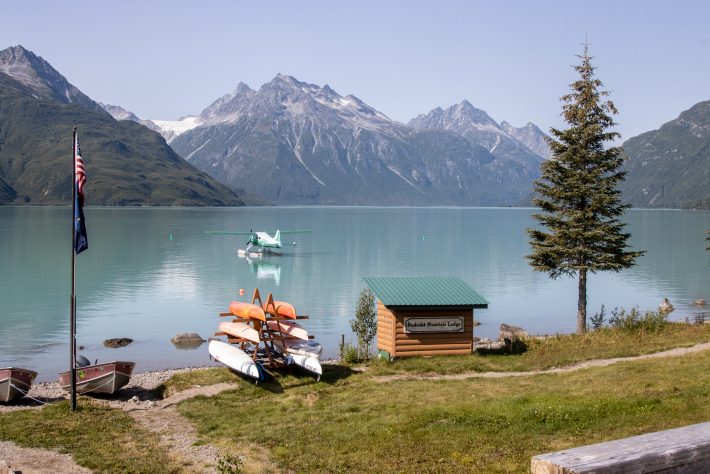 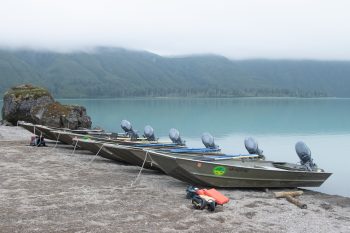 Being on a lake meant we could search for the bears using these boats (and the picture on the right  was our worst weather morning, we had sun and clear skies every day).  No hikes or plane rides required. 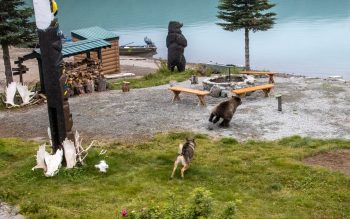 We were in bear county and while the bears are peaceful they are wild, so precautions are necessary. The lodge was surrounded on three sides by an electric fence, but open lakeside.  It was nice to know the lodge’s dogs provided an excellent second line of defense.

Outside the camp the bears were also plentiful.  We would go in the morning for 3 hours, then come back for lunch, download the mornings pictures (usually 500-1000 images) and then a little down time before heading out again for another 3 hour excursion in afternoon before dinner. Repeat for 5 days for an excellent trip.  Each time we went out we would see 6-10 bears, including many cubs – there were at least 2 sets of triplets.  We would see them walking along the shore and the challenge would be to capture them when they dove into the water in an attempt to catch a fish. 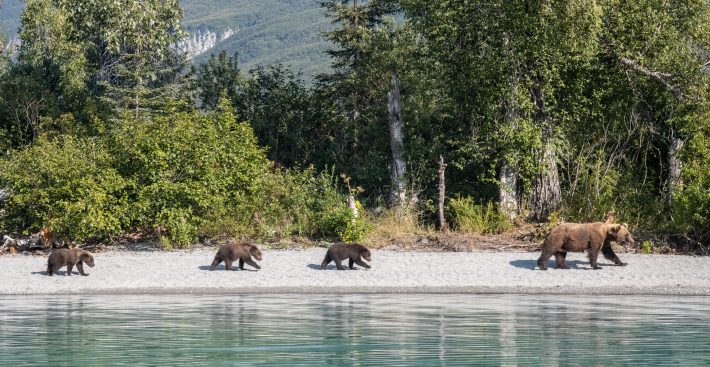 Their hit rate was low, most of the time they would miss and all we would get would be a big splash, but when they did catch one it was a beautiful red sockeye. 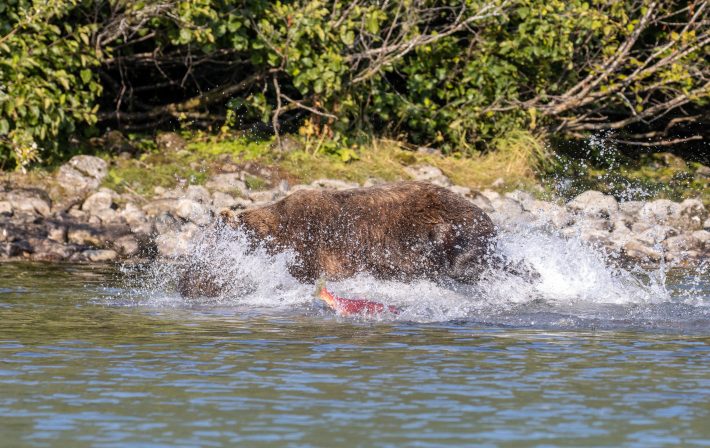 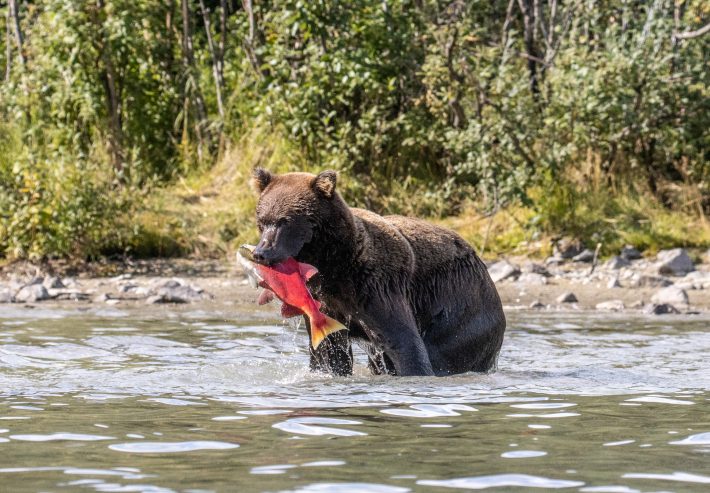 For the moms with cubs, that meant not a full meal for themselves but one they would share with their cubs 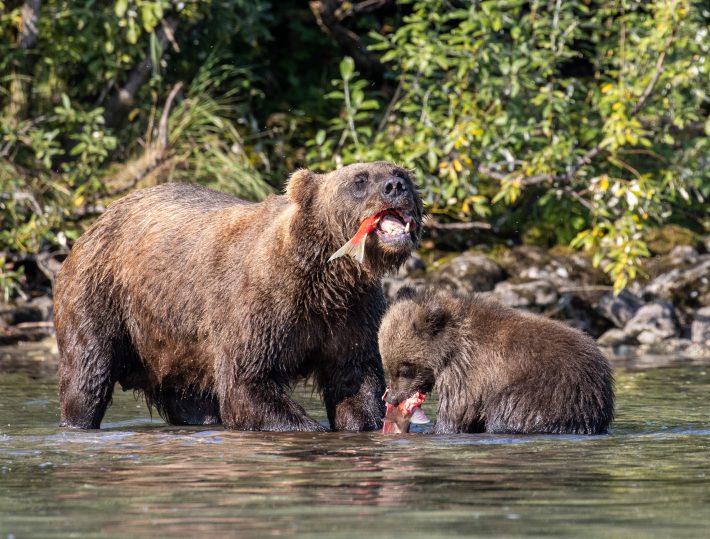 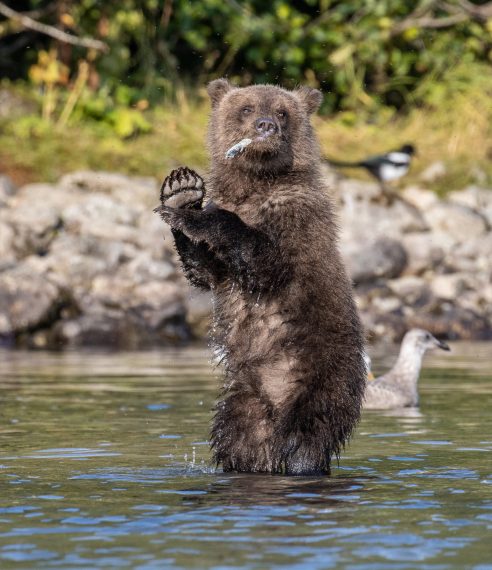 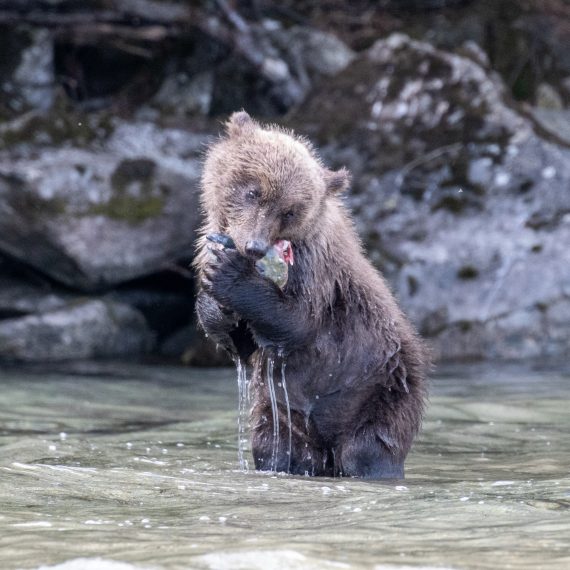 While mom believed in sharing, the some of the cubs didn’t feel the same way resulting in some aggressive sibling interaction 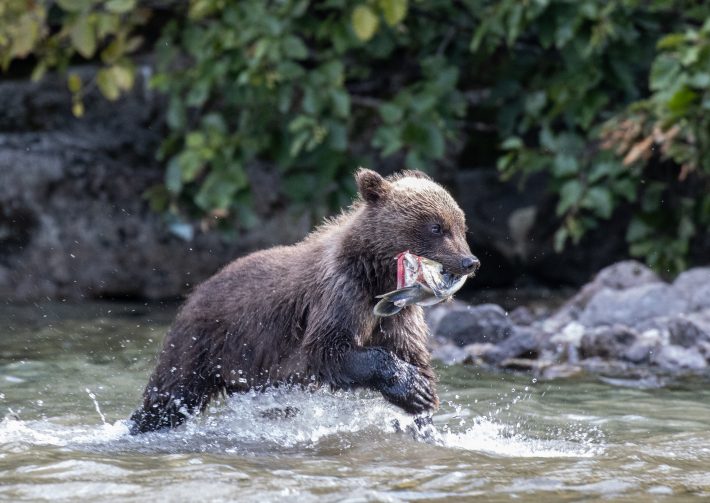 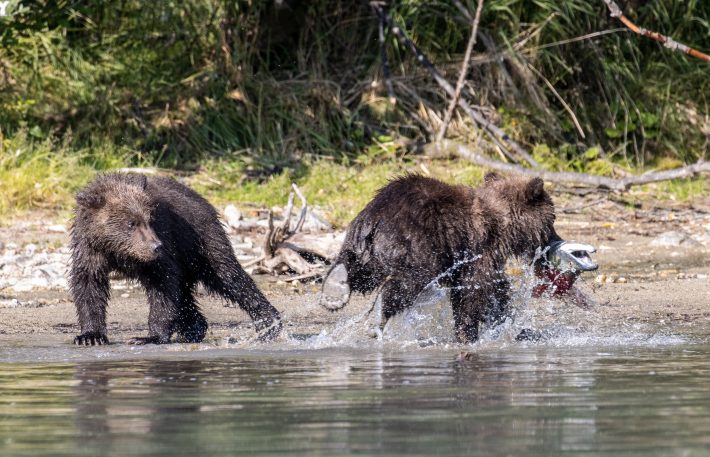 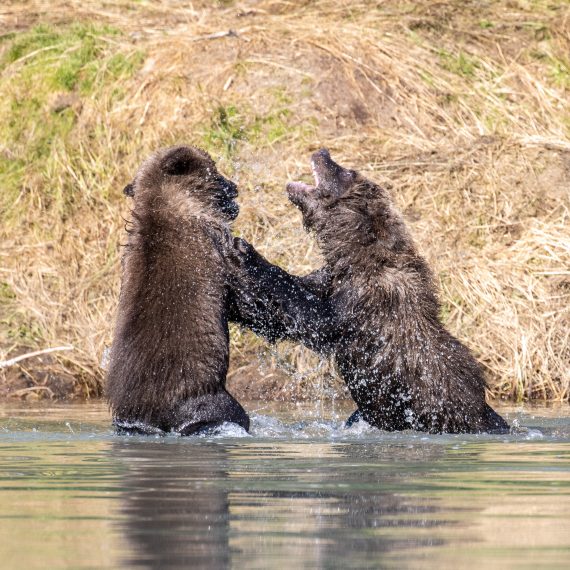 And if they weren’t successful in their fishing, there was always mom’s milk 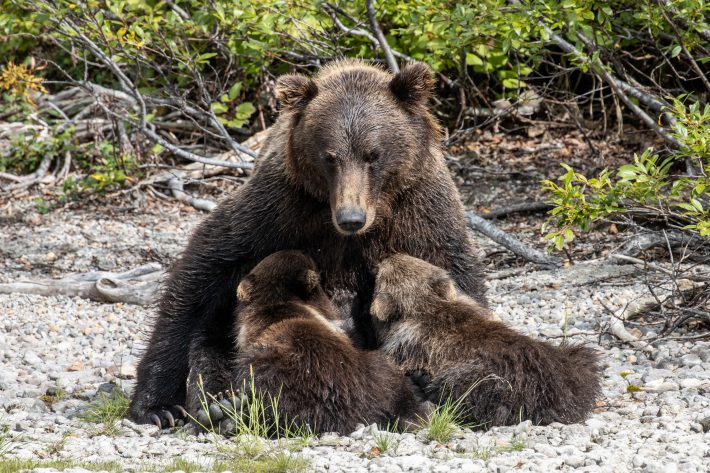 The focus of this trip were the bears, there were basically no birds.  We did see two eagle couples but they were in resting in the trees and we did get some swimming mergansers fishing, which provided a nice change of pace.

But nothing flying.  To satisfy his craving to shoot something flying , Jon turned to photographing the float planes used to access the lodge. 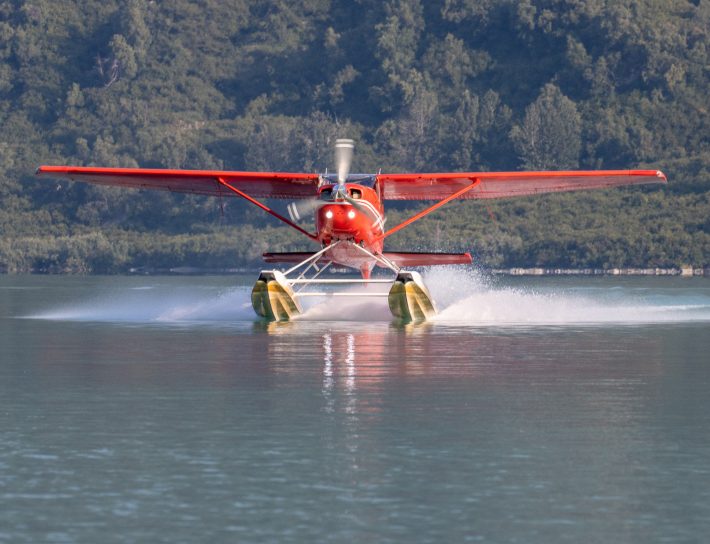 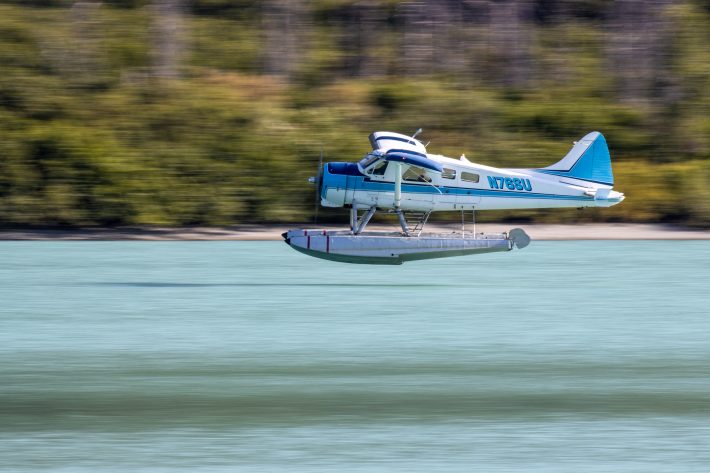 And the since the bears didn’t move fast enough to get any pan blurs, the last picture also satisfied his need to do a pan blur.

Also satisfying his need for capturing motion was the video he shot of the bears fishing:

The worst part of the trip was leaving the lake with its pristine air quality and returning to the Bay Area with all its wildfires and the smoke filled skies.  While we are not in any danger from the fires, the air quality is very bad.  However compared to those in the fire zones we are lucky and our problems minor.